Per Skjoldager and Jorn Erik Nielsen: Aron Nimzowitsch : on the road to chess mastery, 1886-1924 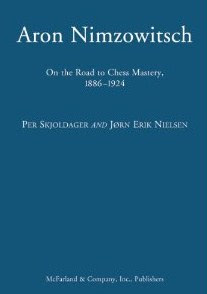 Til now there has not been a generally available biography of Aron Nimzowitsch; there are course his own books, and a number of game collections; but nothing like a comprehensive biography. Nimzowitsch has always had a certain mystic quality attached to him . What the authors have done is to pierce the veil that has obscured the man.

Nimzowitch's early years in Riga, his family life, and his wandering student years in Riga, Zurich, and Germany give us a sense a man pulled between familial duty and his intellectual pursuits; the family business or the life of a chess master.

Almost from the very start of Nimzowitsch's chess career he was the center of controversy, for both his eccentric behavior and unorthodox ideas about chess. Nimzowitsch's first tournament was the 1904 Coburg Haupttunier A, "It was quite a challenge for a newcomer who had not even taken part in a local club tournament. But he had a strong belief in his own abilities and had been practicing hard in the cafes of Berlin."
It may have been this strong belief in his own abilities that may have led many to think of Nimzowitsch as ill-mannered prat.

" A young rising talent, who must keep a tight rein on his temper if he wants to achieve a similar success
in social life as he has done on the chessboard"- Bohemia 29 September 1907

Siegbert Tarrasch known as the "Praeceptor Germaniae" ( the Teacher  of Germany) was one of the most influential chess writers of his time. To Nimzowitsch,  Tarrasch was the great "popularizer" of chess but he considered him intellectual mediocrity. Tarrasch for his part who was also one of the most successful tournament players of his time, thought of Nimzowitsch's play as "perverted". The dispute at times became quite  personal; with each sure of his ideas and each not willing to give any ground. The dispute was carried out in the chess press in game notes and articles, many of which are reproduced in the book, of special interest are those games where both Nimzowitsch and Tarrasch notes to the same game are reproduced. In the end an uneasy peace was reached by these two giants of the chessboard.

Hypermoderism or neo-romantic chess are the terms often used to describe Nimzowitsch's and others theoretical chess ideas, about control of the center; was Hypermoderism a school or a movement? The book quotes the quip from Richard Teichmann that " In the first place there is no Hypermodern School, and in the second place Nimzowitsch is its founder." (p. 219)

There are gaps in the chess career of Nimzowitsch, some of this may be  explained by his dispute with Tarrasch, he didn't play that often in tournaments in Germany where he may have felt Tarrasch and his allies held sway. The first world war and the Russian civil war in its aftermath,  limited Nimzowitsch's playing opportunities. There was also a period when his health became an issue, he is thought to have suffered from tuberculosis for a time.

It was the conditions in post-war Riga that made it necessary that Nimzowitsch settle elsewhere at least for a time. There arose the opportunity to give a number of simultaneous exhibitions along lectures in Sweden then later in the rest of Scandinavia; it was these lectures in which Nimzowitsch was able consolidated the themes for his books; and  over time Nimzowitsch made Scandinavia his home base of operations finally settling in Denmark.

Would we have Nimzowitsch's books, if he didn't have had these interruptions in his career, had he been able to play more often in tournaments? The authors think not, and I tend to agree with them.

Be warned this is no lionizing portrait , there are many anecdotes in the book most at Nimzowitsch expense. He did not suffer those who he viewed as fools lightly, in an era when being a gentleman still mattered; to Nimzowitsch with his outsider status as a Jewish Latvian of  Russian citizenship and rebel nature it seemed not to matter to him.


It is difficult sometimes to review a good book, in that you don't want to overpraise; to gloss over a book faults however minor. No such difficulty exists for this new Nimzowitsch biography, if anything one cannot praise this book enough. A second volume is promised for some time in the future for this reader it cannot come soon enough. If I could I would easily give it six stars out of five. Very well done and like Dickens' Oliver, I want more, please.