The twenty-seventh Western Chess Association Tournament took place in the Red room of Chicago's LaSalle Hotel, from August 21 to September 2, 1926. The Western tournament was held in conjunction with a Masters tournament in which a international group of players competed for $1,800 in prizes, but for the purposes of this post we'll leave the Masters tournament for an another day.

In the Western tournament twenty-two players would  compete,they were divided into A and B sections, with the  top qualifiers from the two sections, would then meet in a final,  for the title of Western Chess Association champion.

Before the commencement of the tournaments, the Western Chess Association elected new officers, electing an all Chicago slate of officers. Maurice S. Kuhns, chairman of the chess section of the Hamilton club was elected president; W. E. Sparrow, chairman of the chess section of the City club was elected vice-president; A. J. Quigley, president of the Chicago Chess and Checker club was elected secretary; Samuel D. Factor, ex-Western Chess Association champion, was named financial secretary-treasurer.

Unfortunately, the Chicago Tribune no longer had a chess column, but thanks to chess column of Chicago Daily News we have some the games from the Western tournament, naturally most of the press coverage was devoted to the Masters tournament, in which among others; Frank Marshall, Carlos Torre, Geza Marcozy, and Edward Lasker competed.

The schedule for the Western tournament was a grueling one, on most days two rounds were played ( play commencing at 1p.m. and 7p.m.) and on those days when just one round was played, any adjourned games needed to completed as there were no free days during the tournament.

The results of the fifth round were Bowers beat Daniels, Hahlbolm beat Brandner, Margolis beat Ballenger, Wight beat Widmeyer, Stolzenberg beat Elison and Steiner beat Spero,  The game between Scrivener and Winter was adjourned at midnight.


Herman Steiner who beats J.L Brandner in the game below, would end up with the best score of all the competitors of both sections of the preliminary tournament.

In what proved to be the decisive game of the tournament Leon Stolzenberg with the black pieces bested Herman Steiner.


"Leon Stolzenberg who is ... playing under the colors of the Detroit Chess club, took a commanding lead in the open section when he defeated Herman Steiner of New York city in a brilliant game, sacrificing his queen."


In time both Steiner and Margolis would become Western Association Champions, in the case of Margolis it would happen at the very next western congress, held in Kalamazoo, Michigan. 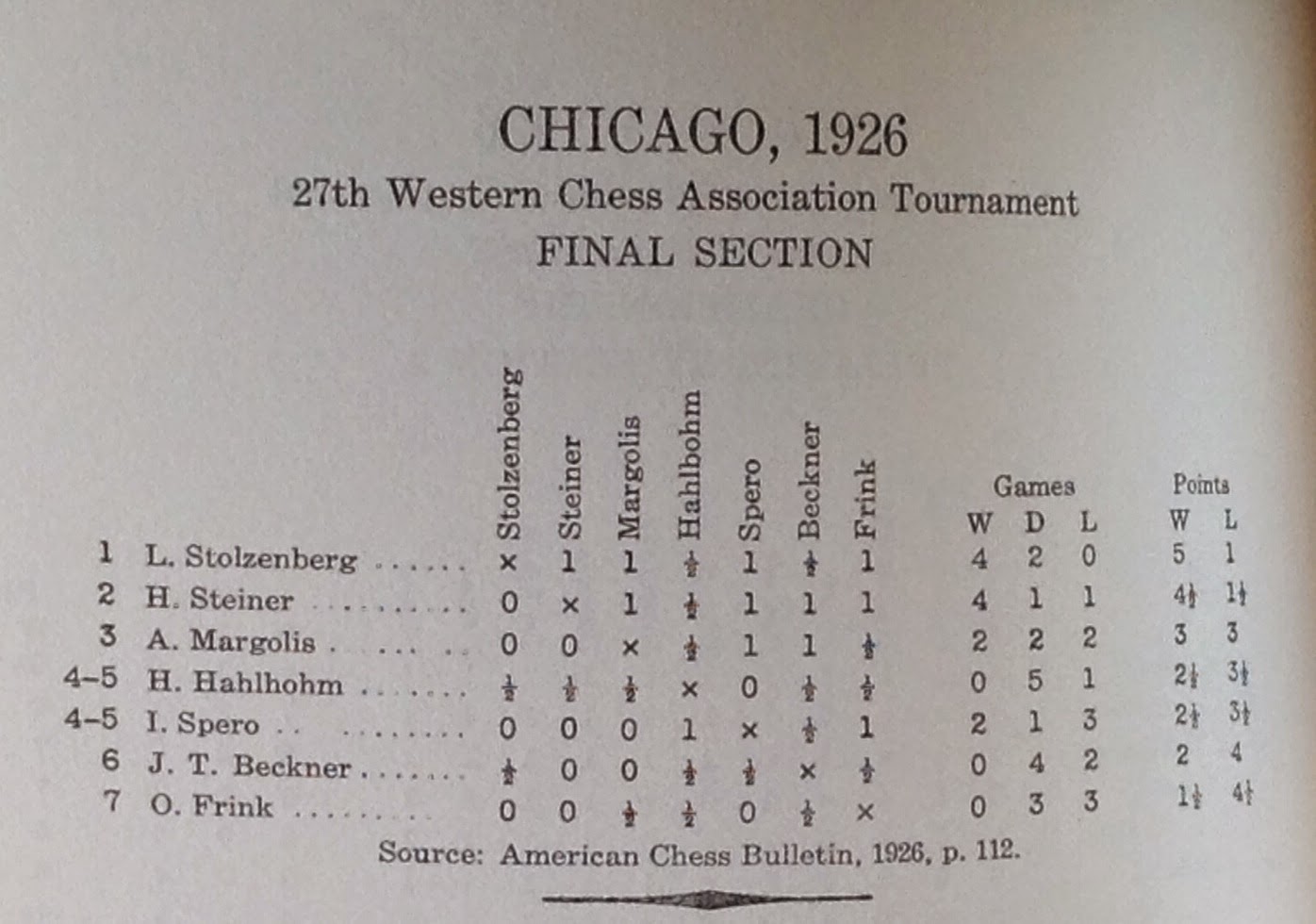 
" Frank J. Marshall, the United States champion, to whom were submitted the games entered for the two special brilliancy prizes in the recent tournament for the championship of the Western Chess Association at Chicago has announced is award, according to Samuel D. Factor, secretary of the Western Chess Association. Charles W. Phillips of Chicago is the winner of the first: known as the Kalamazoo brilliancy prize and consisting of $25 in gold pieces presented by amateurs Kalamazoo Mich. this was for the game from L. H. White [sic] of Kansas City Mo.
Herman Steiner of New York, or winning his game from Charles F. Elison of Chicago was declared the winner of the second prize of $10 offered by R. S. Goerlich of Bethlehem Pa.."
(The Brooklyn Daily Eagle: 14 October 1926)


For more information on Leon Stolzenberg go to following link here and here. I hope to come across more games from this tournament, as I continue my research of Chicago Chess history.
Posted by Chess Reader at 8:24 AM